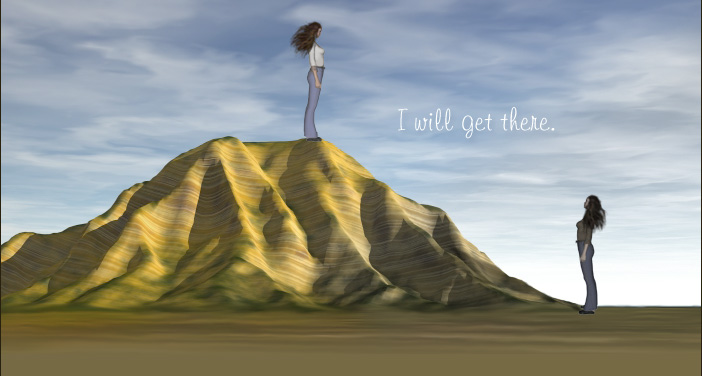 I believe there are two me's. There must be. I see them both, or I see us both, so there must be: The person that I am, and the person that I'm supposed to be, or born to be, or maybe even would be if the molestation had never happened. Then again, maybe I place too much responsibility on what happened in the past. After all, there have always been those who went through the most horrific experiences, either as children or young adults, and they later became some of the most brilliant minds or creative individuals. Whatever hell or sorrow that they experienced, whatever trauma that they went through, they healed and moved on. And they learned from it. They struggled through the darkness. They became stronger, wiser.

People do overcome adversity. They do face the challenges and hardships and go on to become better people. I tell myself that every once in a while and then feel guilty that I sometimes feel stuck in a rut, afraid to jump that imaginary hurdle or to make that ripple in the pool. It wasn't as if I was telling myself to make a big splash, only a ripple, for heaven's sake. Couldn't I even do that?

I try. And I have tried. And the truth is, I have not tried hard enough. Or I do not try hard enough. I do not push myself. If or when I do, it's only for a little while. If I resent others doing the pushing, who else would push me to move me forward? And if I tell myself that I can't rely on another to keep encouraging me, who else would encourage me?

So I look up this humongous mountain and there she is. She made it. It is not that she is untarnished and never been touched. She knows only too well. But she made it. However she did it, I don't know. Or does she only exist in my imagination? I see her there and she's kind and lovely, radiating a confidence and strength that I see only in my daydreams. And she doesn't look down on another if they fail to make the grade. She doesn't chastise nor criticise. If anything, she's the one who encourages softly; she is positive and doesn't hesitate to reach out. She is not afraid to reach out to another. She is also firm, unwavering in her convictions. She looks down at me, me who is at the foot of the mountain, wondering how to make my way up there. It's too hard, too challenging. A huge task to undertake. Too huge and unrealistic, maybe? You give up too easily, she tells me. How did she do it?

Vivacious. Outgoing. A group leader. No, not me. During my early twenties and attending a Vocation Encounter Weekend with other Catholic young adults, I sat in a group which included a young man who was known to be rather sociable and a natural leader. An all-around nice guy. He obviously knew that I was shy and uncertain, someone who would rather take a back seat. When volunteers were requested from each group, he reached forward and gently lifted my elbow so that my arm was raised. I think we had agreed beforehand that I would volunteer. And when the volunteers grouped together - myself included - in front of the other participants, I felt most uncomfortable. Physically, my body didn't like it; it wasn't used to it, standing in front of a group of people like that. I was too visible. It was a new role for me. I think I wanted it, for I wanted to make a difference and sometimes that meant stepping out there in front of everyone else.

A new or different pursuit such as taking up a course at the local college had its challenges as well. I wanted to, or knew that I wanted to. Registering for the class was the easy part. Rushing around, talking to people, looking through the class schedules. That was actually the fun part for I was busy making plans, getting things done. Convincing myself that I could do it was easy as well, that is, until the class itself started and I had to read the syllabus and work on the assignments. It didn't seem that hard, and yet, it did. And there were times when I would go through the book - before the semester began - and feel quite overwhelmed by it. And before I knew it, I had dropped the class, convinced that I wouldn't be able to do it.

It felt as if there was a knot in my gut, something that I couldn't quite get over. If I wanted to do a class, I wanted to do it well. I was not a perfectionist nor an over-achiever. Far from it. I just wanted to do well. And something inside that seems to have taken root - that twisted, ugly knot - then plants a seed in my brain, telling me that I would probably find out that I wasn't very smart after all. And that discovery would be the most terrible thing of all. Or would it?

Surely the most terrible thing would be to avoid doing it, and possibly enriching my mind and later discovering that I could accomplish it, after all. For once I managed to push that ugly knot aside and read the required syllabus and completed my assignments - like a proper student, imagine that - I didn't do too badly at all. I persevered and finished what I had started. But the knot erupts again, right where it's supposed to, and I am undecided and fearful all over again. And so what if I don't do as well at other times? Surely what counted was that I did the best that I could, that I tried to do well? Daren't I even try?

Granted that I was not exactly the brightest of students during my schooldays and I didn't always do well, that is true, but I don't believe I was ever that afraid when I was younger. Perhaps it was easier, in a way, as one school year progressed to another. I wasn't afraid then, merely apathetic, I think. I always did well in English Language. That was my saving grace. It was a bit of a mystery to me why I started doing so poorly in the other subjects. I just know that I did. I didn't feel very smart where those other subjects were concerned and I accepted it.

I'm older now and have been out of school for so many years. The passage of time seems to have allowed the knot to fester and grow. I don't feel it physically, and yet, at the same time, I do. It is hard to explain to another for fear of being looked upon as a fool. The sad truth is that I sometimes allow that knot to tell me what to do. Silly, isn't it?

I want to get there, there where I am comfortable with who I am, able to venture outside of the safety of the imaginary box that was created since I was young. It is safe inside but there is only me within its walls. Outside the walls is a world of endless possibilities, filled with people and places and new experiences that are perhaps waiting for me. Who knows? I certainly wouldn't know anything if I stayed within, would I.

"I'm shy" has been my excuse over the years. An excuse, not a good reason. More recently, it was my excuse for not reaching out to help another, fearful of being seen as pushy or a little too forward. I should be thinking of the other person, not thinking only of myself and what I was leery of. If I was truly concerned about another person, the focus would be on the other person, not on myself. I had to think outside of myself. And I found that there were times when it was not easy to do.

It was my excuse many years ago when, travelling to town in a bus, I saw an elderly man (who was standing) molesting a young woman who was seated, and asleep, in front of him. He would move forward a little and brush his crotch against the woman's shoulder every so often. It was all there, right in front of me. It wasn't a mistake. It wasn't that he couldn't help himself as the bus was moving along. Having had similar experiences with lecherous men, both old and young alike, in the public buses, I knew very well what the old man was up to. Plus I had seen him before. But my body couldn't move and my mouth wouldn't open. I had hoped that someone would say something for surely I couldn't have been the only one to have seen what was going on. To this day, I wonder if the young woman realised what was happening but simply allowed her eyes to remain shut, hoping it would be over soon. To this day, I still feel guilty that I hadn't done anything. Cowardice was my very good friend that day. Shyness said, "I can't," and cowardice conveniently stepped in.

She smiles down at me. She wants me to find out. I think that I am supposed to join her, to become her. And wouldn't it be a shame if, at the end of it all, I didn't?

It is not that I see her as perfect. I know that she is far from perfect. She is wonderfully human and compassionate, a woman who is called to love, a woman not unlike me. But she is also very different.

She is me and yet, she isn't. I am her and yet, I'm not. She is up there, way, way, up there, so out of reach, and I wonder how she ever got there. It is difficult to climb and I am so often afraid. And I've fallen so many times. Spirit, body and soul. She tells me not to give up. I tell me not to give up. Nobody ever said that the journey wouldn't be filled with pot-holes and quicksand, tripping you up now and then or trapping you and swallowing you whole.

"I am afraid of so many things," I tell her.

"Don't be afraid," she tells me. Three simple words. But how reassuring they are, even if only for a brief moment.

I wish she had never left me. But she had to. And now she waits for me. Becoming. Changing. Transforming. She waits. And her infinite patience tells me she is a much more evolved human being than I could ever hope to become.

"Remember that a pupa becomes a chrysalis, and a butterfly struggles to emerge..." she starts to tell me.

"But I don't want to become a butterfly," I say to her, almost like a child. "I just want to be me."

She smiles. And I smile. Another day passes, and I wonder if I'm closer to getting there.